From ancient times the human being created myths and legends to explain the incomprehensible, and the rebirth of nature was one of them. The seasons of the year ruled the life and organization of civilizations, and spring was regarded as the rebirth of the earth, a fact which the ancient Greeks symbolized with the myth of the abduction of Persephone.

Legend has it that Dimitra (the fourth wife of Zeus) was the goddess of agriculture, who lived far from Olympus, in the midst of nature, and always paying close attention to her daughter Persephone. It grew happily surrounded by plants and flowers. 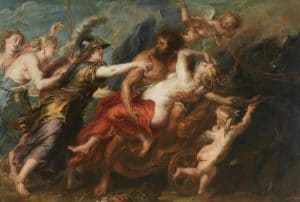 Hades, god of the Underworld, on the day he saw her, directly became infatuated with her, so she rushed to hir brother Zeus to ask permission to be able to make her his wife, to which he agreed. Thus, one day when Persephone was walking in the forest she saw a beautiful flower and when approached to reach out for it, the ground opened and Hades kidnapped the young woman taking her with him to the depths of the earth so as to make her his wife.

Dimitra, her mother, was searching for her in every corner of the known world, without rest. Finally he found the belt that Persephone had lost in the struggle, which caused Dimitra to go into anger and everything around her changed radically: the sky ceased to be blue and became leaden, the trees lost their leaves, the flowers and the crops withered and the lakes and rivers completely frozen; And thus the goddess of agriculture completely neglected her tasks and the land became barren.

Zeus, who could not stand the situation any longer while he watched the earth agonize and saw his wife Dimitra suffer in that way, decided to intervene and alleviate the situation. He forced Hades to return Persephone. Thus, they agreed that Persephone would spend half of the year with his mother Dimitra on earth, and the other half of the year in hell with Hades.

And this is how the origin of spring arises for Greek mythology. The time that Persephone spends on earth with her mother (spring and summer) shows her happiness by renewing the earth, flowers and fruits that are reborn and open with splendor and bright colors. However, when Persephone returns with Hades (autumn and winter) the desolation of her mother causes all around the earth to become sad, to fade and to wither.