Tinos, enchanting and still unknown to most tourists, attracts especially the pilgrims who travel here twice a year, on March 25 and August 15, to visit the church of Panagia Megalochari (the Virgin Mary). From any part of the country, people come here to fulfill their vows and to seek comfort. Tinos is the most important orthodox center of worship in Greece, but at the same time, it is also an important Catholic center; A curious mixture of religious traditions that gives the island a particular character.

But the pilgrimage is not the only reason to know the incredible island of Tinos, but also has magnificent beaches and forty traditional villages, as the philosopher Kastoriadis said, “the handmade Tinos.” This island is home to renowned great marble artists such as Gyzis, Lytras, Chalepas, Filippotis and Sochos, who have carried out the carved marble tradition of the island. According to legend, the famous sculptor of ancient times, Phidias, had taught the secrets of his art to the locals of this island. His admirable office is shown in the chapels, fountains, arches and dovecotes. In the town of Pyrgos there is the Museum of Marble Art, which is worth visiting as well as the Gallery of Artists of Tinos, located right next to the church of the Virgin Mary.

Tinos, as a whole, is a very interesting place to visit. One can enjoy its unspoilt architecture, its picturesque villages, its beautiful beaches, its traditional culture and its lifestyle.

The pan-Hellenic celebrations of 15th  of August in honor of the Virgin Mary are accompanied by other festivals such as those of Tsiknias and Exombourgo and the gastronomic fairs in which there are not lacking the artichokes and raki in Falatados, as well as the festival of honey In Kampos. Tinos is the ideal place for lovers of nature, architecture, art and tradition.

Such as: Pyrgos, Kardiani, Ysternia, Ktikado, Triantaros-Berdemiaros, Falatados, Loutra, Tripotamos. The towns of Tinos are like decorations that decorate the slopes and valleys of the island. Walk among them, one by one, you will see marble everywhere: in the squares, the skylights, in the fountains where you can cool off with a drink of water. Take a break in a traditional cafe under the shade of banana trees and have a coffee or a snack to eat: Tinos cheese, cakes (smoked meat) and sweet raki.

The legend says that Phidias taught the art of sculpture at Tinos. To verify that, simply visit museums such as the Tinos Cultural Center, the Marble Art Museum and the Museum of Artists of Tinos in Pyrgos. Giannoulis Halepas, Dimitris Filippis, the Fitali brothers, Lazaros Sochos and Georgios Vitalis have left their mark here, and thus admire the immortal works of neo-Hellenistic sculpture. If you wish, learn the secrets of your own art skills by taking classes in the marble sculpture workshops.

The pigeon nests are typical of the landscape of Tinos, which are part of the most impressive works of art in the Cyclades: 600 pigeon nests made of slate and limestone are full of lithographs. You will see the pigeons flying around, resisting the attempts to be photographed.

The holy island of the Cyclades

Every year, on the 15th of August, thousands of believers come to Tinos to accompany the procession of the miraculous image. You can hardly see the icon of Panagia Evangelistria, hidden, since it is behind the numerous offerings that surround it. On their knees, the pilgrims begin their ascent from the port to the church. Witness this miracle of faith.

Volax: a lunar landscape in the Aegean

Surrounding it the village of Volax is a peculiar plateau with huge stones. It is as if they had been thrown by a giant, the stones are round, of all sizes and hundreds of years old. They are not meteorites, but a geological phenomenon of global erosion. An experience to admire the wild beauty of this lunar landscape, crossing the Kakovolo region, from Falatado to Panagia Kaki Skala.

The peak of Mount Exomvourgo

At about 640 meters above sea level, the mountain of Exomvourgo stands out among the landmarks of the island. At its base is the Catholic monastery of Ieras Kardias (Sacred Heart), one of the most impressive attractions of the island. The fortress of Exomvourgo, at the peak, became the highest in the Aegean, but was besieged and destroyed by the Turks in 1715. From above you can see the islands of Samos, Ikaria, Naxos and Delos … breathing the Pure Aegean sea air!

If you like sports, know that you are in the right place. Where to practice mountaineering in Exomvourgo, block climbing in Volax, surf in Megali Kolymbithra, diving etc…

You can also go trekking. Follow the ancient roads of the island where you will find ruins of ancient settlements, fountains, windmills, chapels and dovecotes, lithographs and green valleys.

Also do not hesitate to visit the beach of Livadia, which stands out for its sculptures of rocks in the middle of the wild water. When you leave the beach, walk to the lighthouse at Papargyras, and then around the highest mountain of Tinos, Tsiknia. 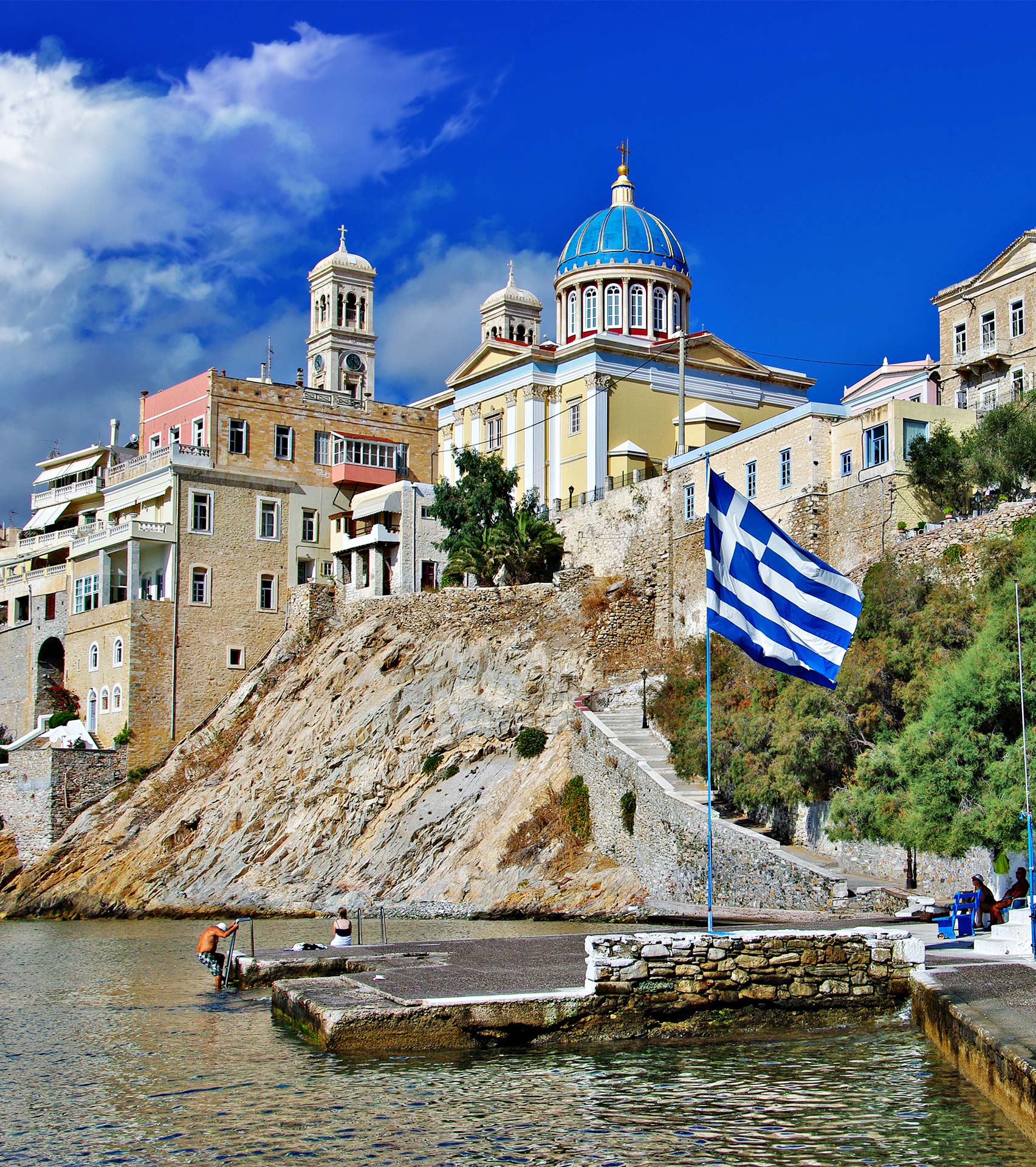