Nafplio, in the prefecture of Argolida in Peloponnese and it’s considered one of the most beautiful cities of Greece. It was one of the most glorious and sought by the conquerors of East and West. The place where the ancient city was built was discovered according to mythology by the god Poseidon and was a key place for maritime communications, protected by cliffs.

From the stunning rock of Akronafplia you can enjoy a panoramic view. It is also of interest to see the ancient city, with its countless ceilings interrupted only by the bell towers of the churches; The castle of Bourtzi, in front of the port, seems like a solitary boat in the middle of the waters; The fig trees that seem to hang from the cliffs; Breathtaking views of the bay of Nafplion and Arvanitia beach guarded by the imposing fortress of Palamidi.

It is said that to get to the top you must walk nine hundred ninety-nine steps, but you can also reach by car, although the effort of walking will be rewarded with magnificent views of the fortress and the valley of Argolis.

In the center of the city, you can find the statue of Kapodistrias and the square of the Admirals, where his pharmacy is the first one that settled in Greece. The Town Hall operates in the old high school, in front of Syntagma square, from which we will reach the house of Kolokotronis, the Mosque, an old Venetian warehouse and the Archaeological Museum, one of the most important in Greece and home to historical memory Of Nafplion.

Previously, the city had been occupied by the Venetians. In fact, many of the buildings date back to the second Venetian occupation, between 1686 and 1834. Thus, strolling through its streets paved with marble and neoclassical buildings, or climbing through the interlocking fortresses, is to go back to the strategic enclave that was the Reason for continuous disputes between Venetians and Ottomans from the fifteenth century onwards, although the origin of the city dates back much earlier.

It has a special charm to have the opportunity to enjoy your coffee in one of the terraces overlooking the sea. From them, you can see the islet of Bourtzi, a castle that seems to float on the water. Following the promenade from the harbor, you can enjoy the views offered by the Gulf of Argolis, whose waters look like silver melted by the sun at sunset. As well as enjoying the small secluded beach of the village, where you can take a good swim in Aegean waters. 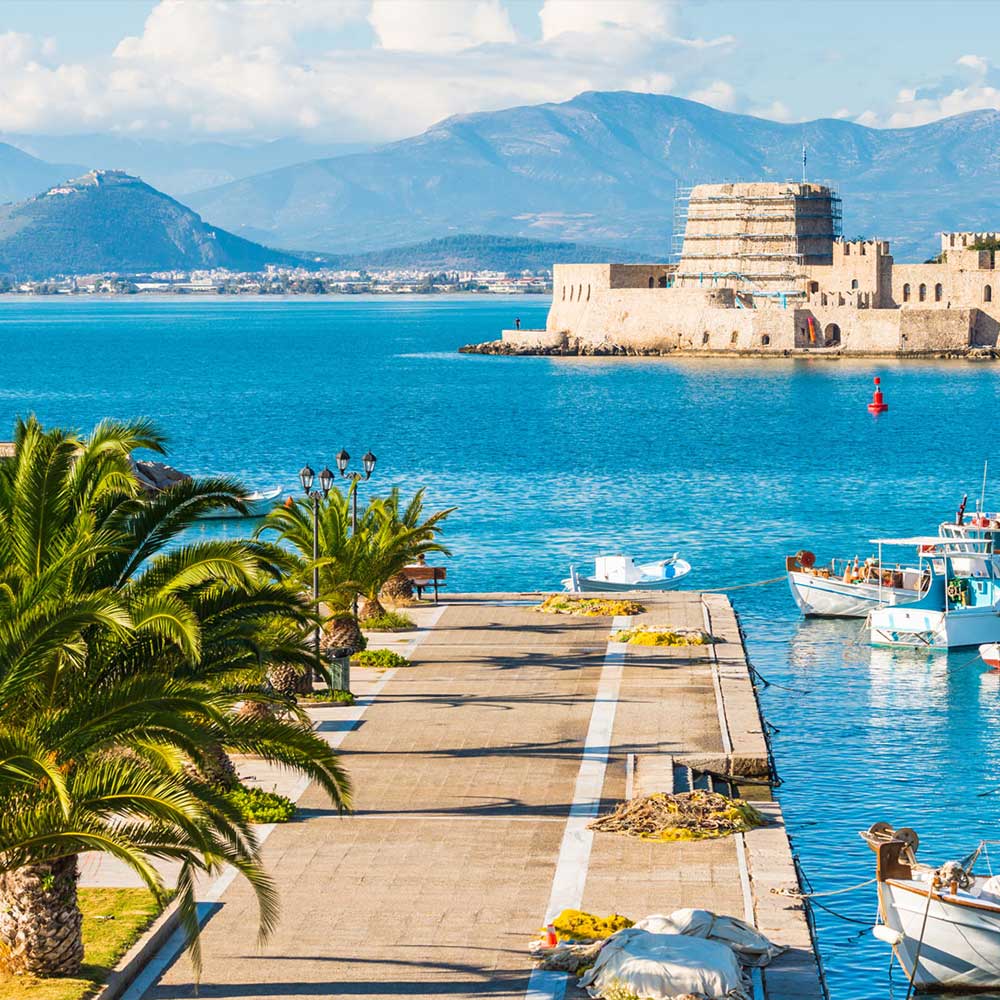